The United States Census has long been a treasure trove of data for market researchers, and the riches have just gotten more rewarding. It now offers data regarding computer usage and internet access.

On December 6, 2018, the United States Census Bureau released its Summary File for the 2013-2017 American Community Survey (ACS) Five Year Estimates. For the first time this data product contains tables for computer ownership and internet subscription. The ACS assists government, community leaders, and companies in understanding how their communities are undergoing change. It contains a wealth of information on U.S. population and housing. The new Five Year Estimates for computer use are further broken down by estimated characteristics such as household income, age, educational attainment, and labor force status.

To fully appreciate the significance and importance of this release, you have to go back 10 years. In 2008 Congress enacted the Broadband Data Improvement Act, with a goal to identify geographical areas of the country that did not have broadband services. Legislators were hoping to promote deployment of services within underserved areas and in addition, bring affordable services to all areas of the country.

In 2013 the Census started asking questions concerning computer and Internet use in its ongoing American Community Survey (ACS).  Each year the ACS randomly samples approximately 3.5 million addresses, and the information from that survey is released each year in two distinct datasets: 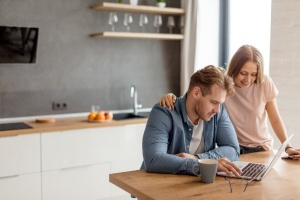 The key difference between the datasets is that the Five Year SF is backed by five years of respondents and thus includes estimates down to a very detailed Census Block Group geography. Block Groups are statistical divisions of census tracts that are defined to contain a minimum of 600 people or 240 housing units and a maximum of 3000 people or 1200 housing units. The One Year SF, created from one year of respondents, only includes estimates for large geographies with a population greater than 65,000. Examples of large geographies are census regions and census divisions, individual states, and metropolitan areas (which are groups of cities and surrounding counties).  Incidentally, there are 501 metro areas with populations greater than 65,000.

Below is an example of the level of detail that can be produced from the One Year SF, looking at Presence of Internet Subscriptions in US Households.

We see that there are 19,400,142 households (16.16%) in the U.S. that have no Internet subscription or no Internet access, and as the map shows, the highest percentage of no subscription households tend to be concentrated in Appalachia and deep south. 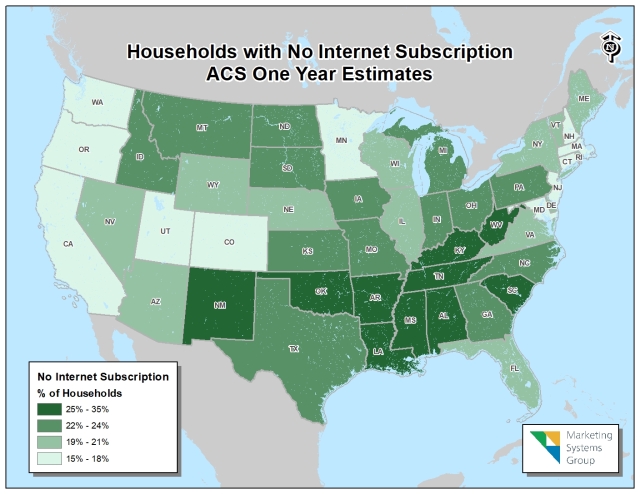 With the 2013-2017 Five Year current release, the ACS has surveyed more than 17.5 million addresses, which is enough to accurately provide estimates down to a detailed level of geography.

However, there is a catch. Unfortunately, just prior to this release the Census announced the removal of the Block Group estimates and it is unclear at this point whether the Block Group estimates will be available before the next release, which is scheduled for December 2019.  This means that currently the lowest level of geography available is Census Tract. A census tract is an area roughly equal to a neighborhood.  Census tracts are smaller than a city, but larger than a block group and generally have a population size between 1,200 and 8,000 people. There are 73,056 Tracts in the US 50 State (+DC) geography.

Below is an example showing how census tract level geography helps to pinpoint particular target households. This analysis can be valuable because it allows users to target specific detailed areas.  In addition, clusters or groups of neighboring areas that have similar characteristics can then be used to define a study area. 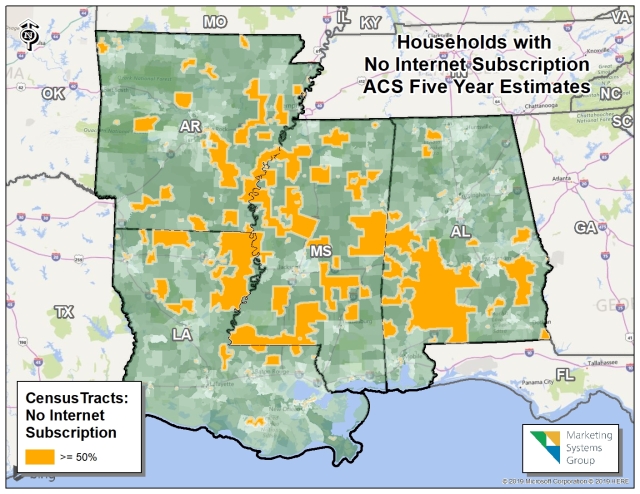 For the first time, the Five Year summary file offers new tables and categories which are available at detailed geographic levels. Click on the link to find out more information. https://www.census.gov/programs-surveys/acs/technical-documentation/table-and-geography-changes/2017/5-year.html

One key website containing census and demographic data is the American Fact Finder.  https://factfinder.census.gov.  This site contains an abundance of information but can be tricky to navigate, manipulate, and comprehend.  With over 35 years of combined experience, MSG’s Geo-Demographic team are experts at working with this data and are here for your project needs.

Visit the Resource Center on the MSG website for National estimates of the new data categories.

Explore our geo-demographic capabilities at http://www.m-s-g.com/Pages/genesys/geo_dem_services

Resources and links used in this article: